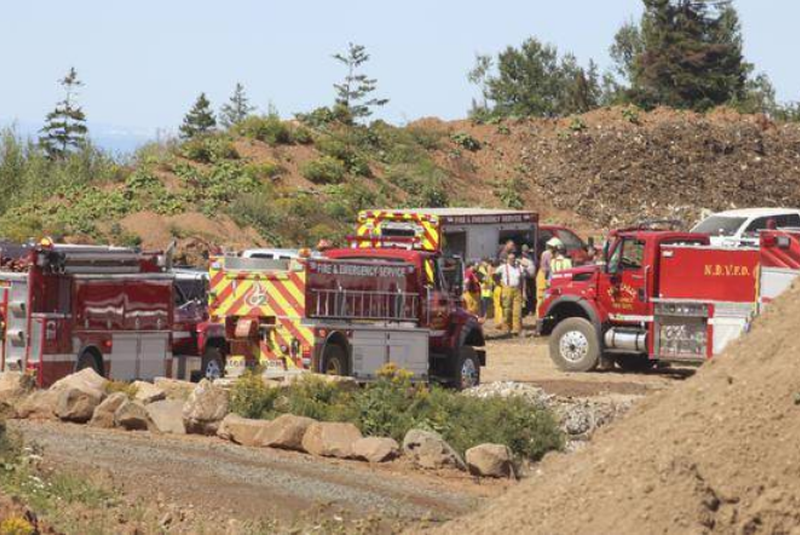 A community group in Kings County says it’s time to get asbestos disposal sites out of Nova Scotians’ backyards.

"We offered the premier about a year and a half ago a suggestion that he establish a provincially owned and operated disposal area instead of parcelling out the asbestos disposal to every little C& D site that wanted to make a little extra money," said Kip Mc-Curdy, who lives in St. Croix Cove, less than a kilometre downhill from the Arlington Heights C& D site.

The Arlington C& D site’s application for an adjacent asbestos waste disposal facility was given the OK by then Environment minister Iain Rankin in July 2017.

The community group of more than two dozen homesteaders calls itself the Annapolis Waterkeepers and says a good deal of the asbestos coming into the facility is being shipped nearly 200 kilometres from Halifax Regional Municipality. The group maintains that the province should find an isolated section of Crown land far removed from any settlement to accommodate an asbestos facility.

"Load containers at the demolition site, seal them at the site, truck them to the disposal area and leave them," McCurdy said. "You don’t bury them because it is quite conceivable that at some point in the future we will find a better way to dispose of that stuff or a way to use it."

Gus Reed of Halifax spends a lot of time at his cottage in St. Croix Cove and worries about contamination.

"There is science to support the idea that asbestos is not easily contained and that you don’t actually have to breathe it to make it hazardous," Reed said. "You can ingest it in all kinds of ways. The government really has a responsibility to make it as safe as possible to dispose of it."

Reed said the community group has pictures of broken bags of asbestos at the site.

"The person operating the dump has a business interest in making sure that they can accept as much asbestos as possible and less of an interest in making sure that it is safely handled," Reed said. "To me, the supervision and the process is sort of upside down. It’s not primarily focused on the safety of the community but primarily focused on getting rid of the asbestos from Halifax."

Jennifer Poole, who has owned the C& D operation for the past two decades, didn’t respond to requests for a phone or email interview Wednesday but said after a fire at the site last year that the operation is in compliance with her permit to operate.

Poole told The Chronicle Herald that an Environment Department inspector was at the asbestos site the day before the fire because of a public complaint but had found no violations.

McCurdy and Reed do not have a lot of confidence in the Environment Department to assess and regulate projects.

"It really does not protect us or the environment," McCurdy said of the department. "I don’t think that’s their mandate. I think what they believe they are supposed to do is approve industrial projects, period. They are not in the environmental protection business."

In a November 2017 report, provincial Auditor General Michael Pickup found that the department had approved 53 of 54 projects that had applied for an environmental assessment from 2013 to 2016. Of 22 projects examined by the auditor general’s office, approvals came with 675 terms and conditions that were required to be met by project owners. For almost half of the 53 terms and conditions tested by the auditor general, the department did not monitor whether the terms and conditions were met. "Nova Scotians value a healthy environment and expect monitoring to occur to see it protected," Pickup said at the time.

"We do this through approvals which include requirements for things like surface and ground water monitoring," Poirier said in an email.

"We work with companies while they are getting ready to submit a project for environmental assessment. If a project cannot be carried out in a sustainable way, that usually becomes apparent during this advance work and the company does not submit the project for approval."

The Waterkeepers group fears that the pending demolition of hospital buildings in Halifax will result in the disposal of more asbestos at the Arlington Heights site, which is limited to 3,000 tonnes of asbestos per year by the conditions of its assessment approval.

"Anyone who is removing asbestos from a building would have to contact a facility in advance and get permission to bring the waste there," Poirier said of the fewer than a dozen listed asbestos disposal facilities in the province. "It is too early to say which facilities will be approached to take asbestos waste from the three buildings at the VG site and two hospitals in Cape Breton that will eventually be decommissioned. Those buildings are still in use."

Meanwhile, the Waterkeepers continue to worry about their well water, despite having independent testing done.

"For the moment, things seem to be OK," McCurdy said, cautioning that there has yet to be water testing done at the watershed below the C& D settling pond.

"So far, nothing has shown up but I’m fairly certain something will eventually show up," he said of the springs and dug wells in the area.

McCurdy said the group has gone to the Annapolis Valley council with its concerns but they say it’s not their jurisdiction. He even button-holed his MLA, Premier Stephen McNeil, at his recent annual picnic.

"He did promise me a meeting. Whether that happens or not, I don’t know because we have been highly critical of the department and everything associated with this asbestos business.

"We’re working all the angles we can work."

Arlington Heights C and D in Annapolis County accepts toxic waste on a mountain that sources 25 downslope domestic wells.  This is dangerous nonsense.  Dozens of terms and conditions are not met.
-There was no community consultation.
-The analysis of soils was falsified.
-Autofluff is not permitted, yet truckloads have arrived.  This is being investigated at a glacial pace by the very department that failed to notice.
-Asbestos arrives daily in contravention of Halifax’s ban on the export of hazardous waste.
-Burying asbestos waste is irresponsible and out-of-date.
-Toxic waste is in the dust, the water, along the roadsides - it is EVERYWHERE!
We demand Environmental Justice for our province!