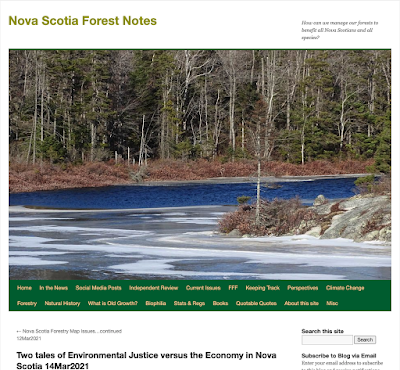 Our friends at Nova Scotia Forest Notes have done a post on Annapolis Waterkeepers, comparing our dilemma with Boat Harbour in the context of Environmental Justice.  It's worth reading!  It concludes with the following wisdom:

... few of us, I think, have wondered where all those materials go when we see older houses (some of them not-so old), concrete parking lots and office buildings disappear, literally within a day or two.

Many of us have probably  tacitly assumed that just as HRM has been a leader in composting and recycling (with a good push in that direction in the 1990s from pesky environmentalists), it is taking appropriate care to dispose of such materials without adverse effects on environment or people.

But, apparently, it isn’t.

That’s a provincial issue, an HRM issue and an every-one-of-us issue.

If we have learned anything from Boat Harbour, which carried the additional stress and shame of racism,  surely it is that for the sake of both the economy and environmental justice,  such issues are best dealt openly and honestly, and  sooner rather than later.  Much sooner.

Arlington Heights C and D in Annapolis County accepts toxic waste on a mountain that sources 25 downslope domestic wells.  This is dangerous nonsense.  Dozens of terms and conditions are not met.
-There was no community consultation.
-The analysis of soils was falsified.
-Autofluff is not permitted, yet truckloads have arrived.  This is being investigated at a glacial pace by the very department that failed to notice.
-Asbestos arrives daily in contravention of Halifax’s ban on the export of hazardous waste.
-Burying asbestos waste is irresponsible and out-of-date.
-Toxic waste is in the dust, the water, along the roadsides - it is EVERYWHERE!
We demand Environmental Justice for our province!